The City of Richfield, MN retained MTJ Roundabout Engineering to provide recommendations to improve driver comprehension to reduce specific crash types – primarily aimed at incorrect lane use. The results were an 80% reduction in lane-discipline issues (left turn from outside lane), and a 20% reduction in lane changes at entrance and exits. The results of these changes were studied by the University of Minnesota Traffic Observatory, and this work effort included an advisory oversight committee consisting of MNDOT, County, and Consulting Engineers.
We quickly recognized several discrepancies between the initial signing and marking design and the implementation seen on the site. MTJ consulted with the city and recommended changes be made to better guide drivers and pedestrians through the intersection. The video on this page shows peak flows (4:30 – 5:30pm) after these signing and marking changes were made.
Issues:

Major recommendations by MTJ were implemented:

The assumption behind the original implementation of the “fish-hook” sign was that it would help prevent wrong-way left turns. Therefore, it is important to note that following the change to standard style, there was no evidence of increased violations of this type.

Hennepin County, in coordination with the Cities of Minneapolis and Richfield, is delivering a bikeway and bus rapid transit route (convert bus bays to adjacent in-lane style stops) project along the north leg of the Portland Ave. at 66th St. roundabout (located in City of Richfield) and extending north to the City of Minneapolis.

In support of the bikeway and bus rapid transit project MTJ Roundabout Engineering (MTJ) conducted operational analysis (Rodel) on the existing 2×2 roundabout, which resulted in lane reductions in 3 of the 4 entries.

Our analysis methodology included both Rodel (deterministic) and Vissim (microsimulation) analysis which provided an understanding of the system interactions between the roundabout and the bus rapid transit operations. This included bus frequency and duration of stops to understand the potential for adverse operational outcomes. Key to this analysis was understanding the queuing from the revised roundabout laneage and the system effects of converting to the in-lane bus rapid transit stops.

“It was a pleasure working with MTJ on a unique project such as this (not too often do we cut back lanes in a recently built roundabout). We greatly appreciate MTJ Roundabout Engineering and the work provided on this project. I highly recommend MTJ!”
Josh Potter, PE – Transportation Engineer
Hennepin County Public Works – Design 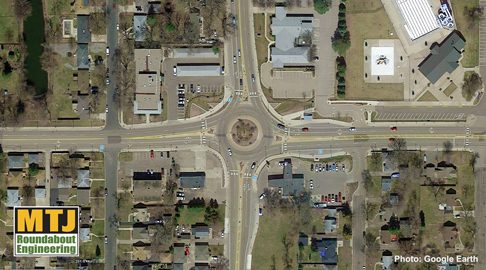